When America’s Got Talent finalist Branden James contacted me to let me know about an event he  and his partner James Clark would be involved in in my country, South Africa, I was immediately taken by the Feast organisation and their aims.  From their website: Feast hosts regular events where lovers of the culinary arts gather to explore new restaurants, incredible wine, and to celebrate life. But the events are more than just a celebration of food and wine, they are a for a good cause. The money we raise through these events ensures that we are able to give back to the hospitality and culinary industry we love so much, by offering the opportunity for growth; both of the restaurants, venues, caterers and wine estates we support and the young aspiring chefs we sponsor.

An invite to such an event is something one can’t say no to, and getting Branden and James to perform at the event (which was held at The Venue in Melrose Arch) was a stroke of sheer mastery.

We arrived rather early as we were to conduct an interview, and we got exposed to a lot of the preparation that went into the event, which is always interesting for me. The professionalism and enthusiasm of the organisers and those involved was evident from the start. The stage and venue were laid out with art works surrounding them, which were to be auctioned off to raise funds for Feast.

At the beginning we got to hear a bit about what Feast was about from organiser Christophe Jouet who has found a wonderful way to combine his culinary and events management talents and in so doing give back to the community. He also mentioned that they had recently employed Linda Mongala and that this was her first event and I want to give special mention to her – she did an amazing job!

We were then treated to some amazing food including starters and a main course, and the wonderful performance of Branden and James who did a lovely set of classical and popular songs which included a tribute to those who passed away in the recent terrorist attack in Nice (more on this later).

The event was well organised and planned and ran well from start to finish, and the food was good too.  We felt quite spoiled! We were seated at a table which included a lady from Albania, some gentlemen from France, and some South Africans. So the conversation was fun and diverse and quite different to what this untravelled South African is used to experiencing. These were good people who were here to make a difference in my country.

After the main course we were told more about the students that Feast has already sponsored, and the art works were auctioned off. Then I got to thinking about how any of these people could be affected by the atrocities going on in the world today.

The Feast event was held a few days after the attack in Nice, on the same day as a military coup in Turkey, in which more than 80 people died. Without going too much into it on a positive post, I wanted to express the fact that the unrest in the world today is terribly upsetting. It goes against what organisations like Feast are trying to achieve, what musicians like Branden and James epitomise, and what Nelson Mandela stood for, and the golden thread that my site honours..  As citizens we are left feeling helpless and sad. To those causing the trouble: Just stop. Stop. Live and let live. Live with love and laughter. But even more, to organisations, celebrities, entertainers and the every day citizen who want to stand in the face of the unrest and promote peace: Just keep doing it and do MORE of it. Your tributes make a difference. Your acts of peace matter. Your acts of reconciliation and kindness count.

Considering that it’s 18 July today, Mandela Day, it seems like a good day to promote love and peace, and feature Feast on Pop Speaking. For more opportunities to do good and follow what Feast is up to next, check out their website 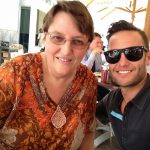